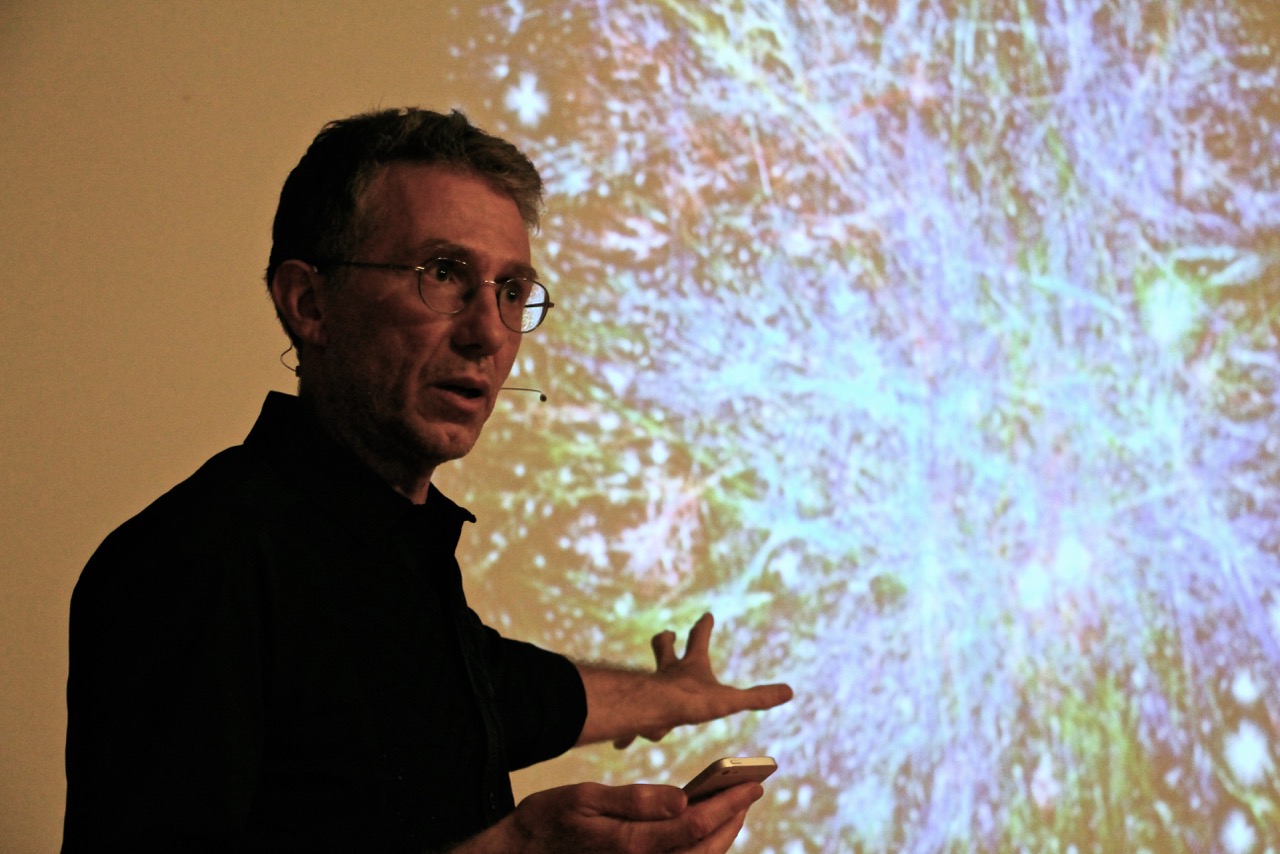 During his trip to Auroville, India, December 2014, Jean-François Noubel gave a conference about collective intelligence and his research work in exploring new ways to exist and evolve consciousness. This conference has different parts, from external objective science to empirical exploration he does at the personal level.

In this first part you will hear the great story about collective intelligence. How did it evolve through the ages, where does it go today? This part focuses on the external objective aspects of scientific research: facts, data, words.

Evolving the We in the I

The second part of the conference offers a more complex –and deeper– understanding of collective intelligence by addressing how the collective operates in the self, how the “we” plays in the “I”. Hence the fact that we see many collectives that evolve lot’s of external aspects such as technology or governance, but people still carry, like holograms, the social dna of the old society: same social codes, same wealth technology (money), same language, same food, same relationship with the body, same beliefs (doxa), same relationship to time, etc. JF Noubel’s research has lead him to explore and deconstruct this social dna and explore new possibilities. He shares some examples in the videos below.

Language carries lot’s of archaic forms of consciousness in the way it builds reality in our individual and collective psyche. Unveiling these archaic forms and deciding whether we get rid of them of evolves them helps make important evolutionary steps, individually and collectively. Here JF Noubel shares the example of speaking in e-prime (not using the verb “to be”).

No social code exist randomly. No matter how unconsciously we perpetuate social codes, they all have a function: perpetuate and maintain a given social order. Evolution means we also question the function of each social code, and decide what we want to keep, get rid of, or evolve. In this part of the conference JF Noubel shares how he changed a few social codes, like breathing before speaking, and the consequences it had on him and around him.

Pyramidal collective intelligence has made market economy its core economic engine. Why? Because gift economy didn’t have the capacity to reach large scales due to the exponential complexity it generates. However now holomidal collective intelligence allows the rise of gift economies at large scale, offering amazing competitive advantages compared to market economy. But it takes a quantum leap to understand and trust the process, a question that JF Noubel shares in this part of the conference.

Food carries lot’s of social beliefs and binding in it. Food and consciousness walk hand in hand. If one asks this double question: “what does good for me and for the world at the same time?”, then no conventional cuisine today offers a satisfying answer. Evolving the self means evolving the way we eat.

Technology also shapes individual and collective consciousness. We have a different world and reality before and after the invention of fire, of the writing, of the printing press, of flight, of computers, of internet. What consciousness do we cultivate in order to have technology serve us rather than the opposite?

Last but not least, the body plays a key role in invisible architectures. Culture determines in a large manner the relationship we have with or body, how we experience it, how we manifest it. Conventional lifestyle in the pyramidal collective intelligence world places the body in a social and cultural mold. How can we free ourselves and get to live fully our bodily experience? Why should we do that? What consequences?

If we had 3 core ideas to keep in mind, Jean-François Noubel would pick these ones:

People in the public asked a series of questions, as shared on the time line below.

2:10 – In the gift economy, don’t people usually give back to you rather than giving back to someone else?

5:15 – Can we consider an intermediary stage between market economy and gift economy that we could call social entrepreneurship?

9:30 – Question from a sports coach: “I follow my heart by teaching what I love and do the best, however it keeps me binded to  a city, a place where I don’t want to live. If I follow and listen to my heart, how should I deal with this?”

15:10 – How does friendship play in linking the I and the We? What role of social environment in this transformation?

20:00 – Do you know good examples of holomidal collective intelligence?

24:40 – Auroville began with very innovative ideas about education. Unexperienced people applied them, and later more and more of the pyramidal world came in, with money, taxes, etc. So, what do you think about education?

29:10 – 2 questions:
1. What sense do you have about our organization in Auroville ? Does it contribute to the holomidal collective intelligence?
2. When you work with companies, what agreements do you propose for groups to change in a soft way?

35:20 – You have yourself evolved towards live (raw) food, but before enough people make such a conscious step, they will end up depleting our current natural resources. What do you think about that?

37:15 – You’ve spoken about collective intelligence and share about things you do at the personal level. How do you do the two things combined together, the personal and the collective?